From Asia’s Rise in the New World Trade Order

From What is Regional Trade Blocs or Free Trade Agreements?

As trade integration across countries is intensifying, we hear more and more about Free Trade Agreements (FTAs) and Regional Trade Blocs (RTBs). As their name suggests these RTBs/FTAs are arrangements aimed for faster trade liberalisation at regional levels.

Countries are convinced that trade is an engine of growth and they are searching for arrangements that promote trade.

This has led to interest in trade liberalisation within a limited number of countries that may be regionally close together. These regional trade promoting arrangements advocate more tariff cuts and removal of other restrictions within the group while maintaining restrictions against the rest of the world.

Though many regional trade agreements like the EU, NAFTA and ASEAN were established before or around the time of WTO’s formation, there is mushrooming of RTBs in recent years. Recently formed Trans Pacific Partnership (TPP) shows this increasing affinity towards RTBs. Many RTBs like the TPP would like to make advanced level trade liberalisation and hence they are not satisfied with the slow pace of trade liberalisation within the WTO.

What are Regional Trade Blocs (RTBs)?

Regional Trade Blocs or Regional Trade Agreements (or Free Trade Agreements) are a type of regional intergovernmental arrangement, where the participating countries agree to reduce or eliminate barriers to trade like tariffs and non-tariff barriers.  The RTBs are thus historically known for promoting trade within a region by reducing or eliminating tariff among the member countries.

The EU, NAFTA, ASEAN, SAFTA etc are all examples for regional integration. The triad of North America, Western Europe, and Asia Pacific have the most successful trade blocs. Recently signed Trans Pacific Partnership is a powerful RTB. Similarly, another one called RCEP is in negotiation round. India has signed an FTA with the ASEAN in 2009. Simultaneously, the country has signed many bilateral FTAs.

All regional trade blocs don’t have the same degree of trade liberalisation. They may differ in terms of the extent of tariff cutting, coverage of goods and services, treatment of cross border investment among them, agreement on movement of labour etc.

The simple form of regional trade bloc is the Free Trade Area. The Free Trade Area is a type of trade bloc, a designated group of countries that have agreed to eliminate tariffs, quotas and preferences on most (if not all)goods and services traded between them.

From the lowest to the highest, regional trade integration may vary from just tariff reduction arrangement to adoption of a single currency. The most common type of regional trade bloc is the free trade agreement where the members abolish tariffs within the region. Following are the main types of regional economic integrations.

Preferential trading union: Here, two or more countries form a trading club or a union and reduce tariffs on imports of each other ie, when they exchange tariff preferences and concessions.

Free trade union or association: Member countries abolish all tariffs within the union, but maintain their individual tariffs against the rest of the world.

Customs union: countries abolish all tariffs within and adopt a common external tariff against the rest of the world.

Common market: in addition to the customs union, unrestricted movement of all factors of production including labour between the member countries. In the case of European Common Market, once a visa is obtained one can get employed in France or Germany or in any other member country with limited restrictions.

Economic union: The Economic Union is the highest form of economic co-operation. In addition to the common market, there is common currency, common fiscal and monetary policies and exchange rate policies etc. European Union is the example for an Economic Union. Under the European Monetary Union, there is only one currency- the Euro.

At present, out of the total regional trade arrangements FTAs are the most common, accounting for nearly 90 per cent.

From Regionalism in a globalizing world: an Asia-Pacific perspective

From Asia’s Rise in the New World Trade Order

International trade is a driving force behind economic growth, and two so-called “mega-regional” trade deals are dominating public debate on the issue: the Trans-Pacific Partnership (TPP) and the Transatlantic Trade and Investment Partnership (TTIP).

But there are around 420 regional trade agreements already in force around the world, according to the World Trade Organization. Although not all are free trade agreements (FTAs), they still shape global trade as we know it.

What exactly are free trade areas?

The OECD defines a free trade area as a group of “countries within which tariffs and non-tariff trade barriers between the members are generally abolished but with no common trade policy toward non-members”.

The free movement of goods and services, both in the sense of geography and price, is the foundation of these trading agreements. However, tariffs are not necessarily completely abolished for all products.

Which are the world’s major free trade areas?

Free trade between the three member nations, Canada, the US and Mexico, has been in place since January 1994. Although tariffs weren’t fully abolished until 2008, by 2014 total trilateral merchandise trade exceeded US$1.12 trillion.

According to the US government, trade with Canada and Mexico supports more than 140,000 small and medium-size businesses and over 3 million jobs in the US. Gains in Canada are reportedly even higher, with 4.7 million new jobs added since 1993. The country is also the largest exporter of goods to the US.

However, the Council on Foreign Relations suggests that the impact on Mexico is harder to assess. Per capita income has not risen as fast as expected; nor has it slowed Mexican emigration to the US. However, farm exports to the US have tripled since 1994, and the cost of goods in Mexico has declined. The cost of basic household goods has halved since NAFTA came into force, according to estimates by GEA, a Mexican economic consulting firm.

The AFTA was signed in January 1992 in Singapore. The original members were Brunei, Indonesia, Malaysia, Philippines, Singapore and Thailand. Four countries have subsequently joined: Vietnam, Laos, Myanmar and Cambodia.

The bloc has largely removed all export and import duties on items traded between the nations. It has also entered into agreements with a number of other nations, including China, eliminating tariffs on around 90% of imported goods.

The AFTA nations had a combined GDP of US$2.3 trillion in 2012, and they’re home to 600 million people. The agreement has therefore helped to dramatically reduce the cost of trade for a huge number of businesses and people.

But MERCOSUR is still one of the world’s leading economic blocs, and has a major influence on South American trade and the global economy.

Formed in December 1994, the organization aims to develop natural and human resources to benefit the region’s population. Its primary focus, according to the United Nations, is to establish a large economic and unit to overcome barriers to trade.

With 19 member states, and an annual export bill in excess of $80 billion, the organization is a significant market place, both within Africa and globally.

COMESA utlimately aims to remove all barriers to intra-regional trade, starting with preferential tariffs and working towards a tariff-free common market and economic union.

What about the European Union?

The EU is a single market, which is similar to a free trade area in that it has no tariffs, quotas or taxes on trade; but a single market allows the free movement of goods, services, capital and people.

The EU strives to remove non-tariff barriers to trade by applying the same rules and regulations to all of its member states. The region-wide regulations on everything from working hours to packaging are an attempt to create a level playing field. This is not necessarily the case in a free trade area.

The creation of the single market was a slow process. In 1957, the Treaty of Rome established the European Economic Community (EEC) or Common Market. However, it was not until 1986 that the Single European Act was signed. This treaty formed the basis of the single market as we know it, as it aimed to establish the free-flow of trade across EU borders. By 1993 this process was largely complete, although work on a single market for services is still ongoing.

Today, the EU is the world’s largest economy, and the biggest exporter and importer. The EU itself has free trade agreements with other nations, including South Korea, Mexico and South Africa.

What about the TPP and TTIP?

Once fully ratified, the Trans-Pacific Partnership is set to become the world’s largest trade agreement. The TPP already covers 40% of global GDP, and trade between member nations is already significant.

However, by removing tariffs and other barriers to trade, the agreement hopes to further develop economic ties and boost economic growth.

The Transatlantic Trade and Investment Partnership is a deal currently being negotiated between the EU and the US. If reached, it would itself become the world’s largest trade agreement – covering 45% of global GDP.

Like the TPP, it aims to cut tariffs and regulatory barriers to trade. Among these is the removal of customs duties, according to the EU’s negotiation factsheet.

The Center for Economic Policy Research has estimated that the deal would be worth $134 billion a year for the EU and $107 billion for the US – although opponents have disputed these figures.

As the World Economic Forum’s E15 Initiative has highlighted, effective global trade is central to economic growth and development. Trade agreements are an integral part of making this a reality. 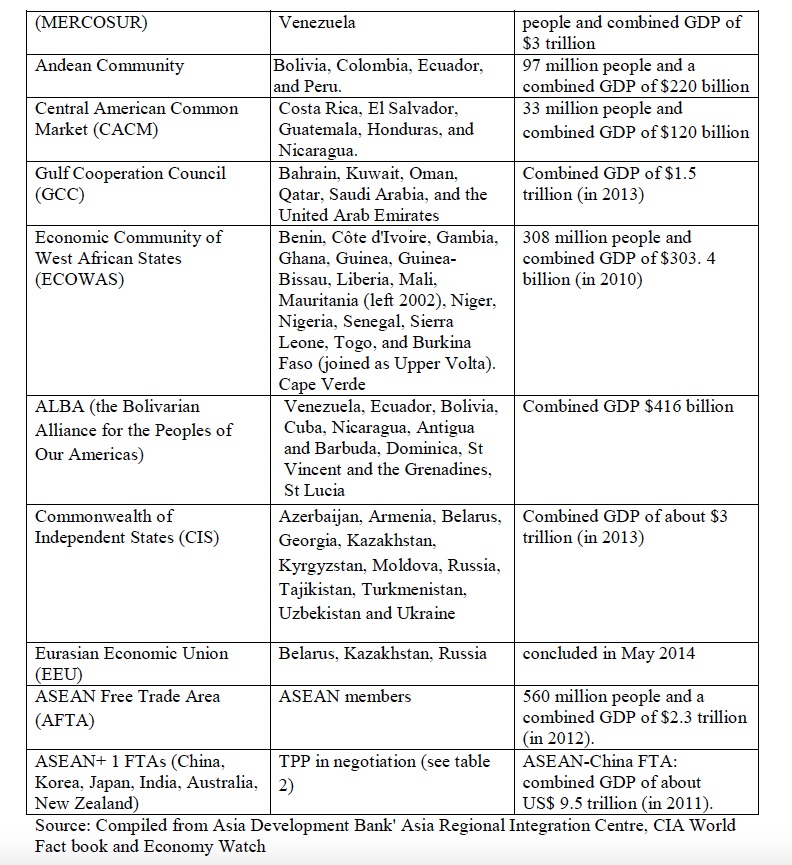 What is Regional Trade Blocs or Free Trade Agreements?

Globalization and the Growth in Free Trade Agreements

Regional Trade Agreements in a Multilateral Trade Regime: An Overview

Trade Blocks and the Gravity Model: A Study of Economic Integration among Asian
Developing Countries

REGIONAL TRADE BLOCS THE WAY TO THE FUTURE?

Regional Trade Agreements and the WTO

PREFERENTIAL TRADE AGREEMENTS AND THE WTO: IMPETUS OR IMPEDIMENT?

The Effects of Mega-Regional Trade Agreements on Asian Countries

Part 2 of the GED Study Series:

What are mega-regional trade agreements?

Mega-Regional Trade Agreements and the Future of the WTO

Regionalism in a globalizing world: an Asia-Pacific perspective

You can contact me using this email mchatur at the rate of AOL.COM. My professional profile is on Linkedin.com. View all posts by Mayank Chaturvedi

One thought on “Regional Trading Blocs and Economic Integration”