TARGET2 is the RTGS system for the whole of European Monetary Union.  It uses a SSP Single Shared Platform rather than interlink system of national RTGS systems.

There are imbalances between core countries with periphery counties.  It has become a cause of concerns among European Economists.  These imbalances affect political economy of EU area.

Germany has a large surplus in TARGET2.  Finland, Luxemborg, Netherlands also have surplus.

For political reasons, if Italy or Greece decide to leave the EMU, then they are supposed to settle their debts.  But they can not do that.  Other countries in EMU will have to bear the burden of unpaid debts of leaving countries.

There are many lessens for other regions around the world who are contemplating monetary unions.  AMU in ASEAN region is one such example.  They should carefully learn from experiences of EMU as how not to do things. 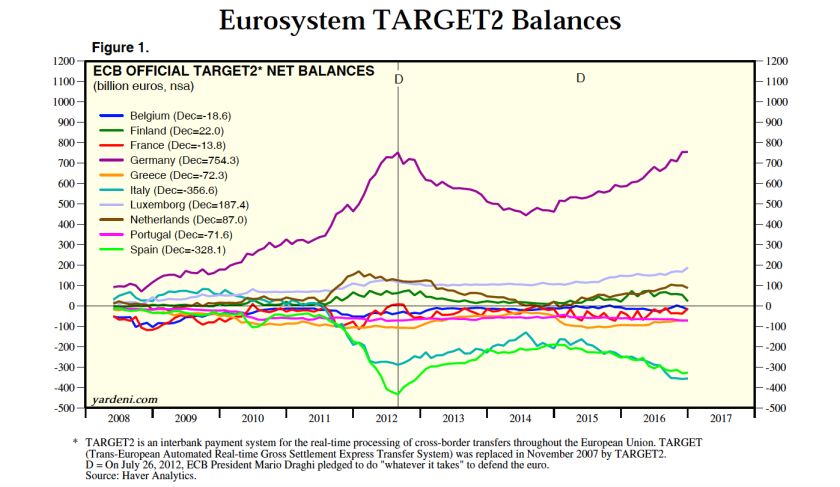 TARGET2 is a payment system that enables the speedy and final settlement of national and cross-border payments in central bank money. An average of around 350,000 payments with a value of just under €2½ trillion are processed using TARGET2 each working day, a figure which is broadly equivalent to the size of Germany’s GDP. During a whole year, TARGET2 settles about 90 million payments with a value of about € 600,000 billion. These payment transactions can take a wide variety of forms, such as payment for a goods delivery, the purchase or sale of a security, the granting or repayment of a loan or the depositing of funds at a bank, among many others.

In addition to payments between credit institutions and from other systems (eg securities settlement systems), payments undertaken as part of the Eurosystem’s open market operations are settled via TARGET2.

If, for example, foreign funds are transferred to a bank that participates in TARGET2 via the Bundesbank, this results in a liability of the Bundesbank to this bank (such as in the form of a credit to this amount on the bank‘s current account). In return, the transaction generates a Bundesbank claim for the same sum on the sending central bank. This central bank then in turn debits the account of the originating commercial bank. This requires the originating commercial bank to have a sufficient credit balance in central bank money. Central bank credit balances are primarily provided by the Eurosystem’s monetary policy refinancing operations.

The resulting claims and liabilities generated at the national central banks by the multiple transactions over the course of a day normally do not fully balance out. Under the terms of a Eurosystem agreement, the outstanding claims and liabilities of all the national central banks participating inTARGET2 are transferred to the ECB at the end of the business day, where they are netted out. The resulting TARGET2 (net) balances hence arise from the cross-border distribution of central bank money within the Eurosystem’s decentralized structure.

The existence of a substantial German claim on the Eurosystem is well known. As shown in Graph 1, since the beginning of the financial crisis in August 2007, claims of the Deutsche Bundesbank on the Eurosystem through the TARGET2 system have gone from basically zero to more than €700 billion.1 This has led to a debate over what this accumulation means and what, if anything, should be done about it.

Interpretations of this and other TARGET2 balances fall into two camps. The first, judged a minority view by Auer (2012), is that these balances correspond to current account financing. We label this the flow interpretation. Proponents have included most prominently Sinn and Wollmershäuser (2012), whose views originally appeared as a working paper a year ago (Sinn and Wollmershäuser (2011)).2 Fahrholz and Freytag (2012) take the view that the current account imbalance will create persistent TARGET2 balances.

The second camp, including Buiter et al (2011), Mody and Bornhorst (2012), Bindseil and König (2012), and3 Cecioni and Ferrero (2012) interprets TARGET2 balances as a “capital account reversal”. That is, they see this as one symptom of a balance of payments crisis. Bindseil and König (2012) argue that the Eurosystem full allotment refinancing operations should be seen as financing the reversal of an outstanding stock of cross-border claims while the TARGET2 payments system merely records the results. We label this the stock interpretation, and trace it originally to Garber (1999).

The members of the European Economic Advisory Group (2012) take an intermediate position. They read Sinn and Wollmershäuser (2011) as arguing that Greece and Portugal financed their current account deficits in 2008 to 2010 through TARGET2, while Ireland’s TARGET2 balance was associated with a capital outflow and Spain’s TARGET2 balance financed only a quarter of its cumulated current account. Italy is identified as a case of “capital flight” in late 2011. More formally, Auer (2012) uses panel regressions to find that the TARGET2 balances track both current accounts and bank flows from Q3 2007 to Q1 2012.

Our work is most closely related to that of Auer (2012).4 Like him, we juxtapose TARGET2 balances with both current account and capital flow data, using BIS banking data. The new element in our work is that we distinguish between capital flows motivated by concerns over creditworthiness and those motivated by the low probability of redenomination.

Fed versus ECB: How Target debts can be repaid

TARGET2 BALANCES OF NATIONAL CENTRAL BANKS IN THE EURO AREA

What Drives Target2 Balances? Evidence From a Panel Analysis

Target2 imbalances are rising, should we worry?

by Martina Cecioni* and Giuseppe Ferrero

Balance of Payments in the European Periphery

The European crisis and the accumulation of TARGET2 imbalances

EMU Target2 imbalances are not a sign of something wrong

Greece, QE and the Target balances

TARGET2: Symptom, Not Cause, of Eurozone Woes

By Thomas A. Lubik and Karl Rhodes

The economics of TARGET2 balances

Target 2 of the ECB vs. Interdistrict Settlement Account of the Federal Reserve

TArgeT BAlAnceS And The criSiS in The euro AreA